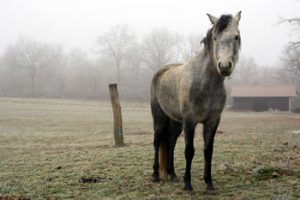 Public relations solutions can be simple. Reporter Chris Lusvardi illustrated this point in the Herald & Review newspaper when he described how a man used a low-tech mode of transportation to get to a courthouse in Decatur: he rode a horse.

Attorneys can take away three principles from this man’s resourcefulness (which ended up getting lots of publicity).

1 – Technology is not always necessary. Lawyers assume that they have to use all kinds of digital tools to get publicity for a case or attention for their clients. However, sometimes a situation doesn’t require any technology at all. One way to be simply proactive is to thank a colleague or client with a handwritten note. A notecard with a message written by pen (instead of a computer) stands out and shows others your concern because you took the time to create something more personal.

2 – Show more than tell. The man rode the horse to the courthouse because his license was suspended, and no one was available to drive him to court. Even without that explanation, just the image of him with the horse spoke for itself, and was easily shared throughout social and broadcast media. Attorneys can also think about how to use images to get attention for their cases. One example is a police surveillance video connected to a court case that can be made available at a firm’s website for the media and public to access.

3 – Think beyond the story. The man’s solution to his transportation problem got him attention, but it also helped his reputation. Chris Lusvardi reported that “an investigator with the Macon County Public Defender’s Office” said that what the man did was inspirational. The investigator also said “It can be a lesson…Some guys can’t seem to make it, and they live two blocks away.” So the next time you create a publicity plan, look at the possibilities beyond your immediate tactics. Whatever you decide, think about how it’s affecting your reputation.

A version of this blog post first appeared at the Law Firm Consultants Network of Chicago.