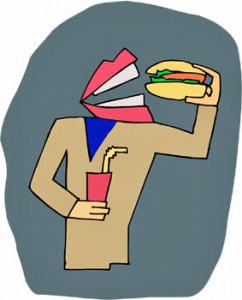 McDonald’s is a huge, established company, but it’s still making public relations mistakes that you would expect from a start-up business. The latest is its internal website for employees, where several posts talked about the negative effects of fast food, the same kind of food that McDonald’s has been selling for years. If the company had been paying attention to what it was communicating, it probably wouldn’t have let those posts be written. But NBC News says they were created by an outside vendor, so McDonald’s wasn’t carefully supervising who they hired.Before that leaked out, there was another publicity gaff that also came from an internal employee site.The company gave advice for tipping au pairs, pool cleaners, housekeepers, dog walkers, and personal trainers. What it failed to notice was a lot of McDonald’s employees earn minimum wage, which is what they’ve been protesting about this year. Again, the advice was written by a third party, which shows a sloppy communication plan and a lack of quality control.

Whether you’re hiring an outside company or you’re handling your own publicity, it’s important to pay attention to your internal and external communication. The two are connected, and you never know what disgruntled employees will leak to the press. Make sure your message is consistent, because if you present a public image that doesn’t match your in-house one, your reputation will be damaged, and you’ll have to be even more creative with your crisis communication plan.