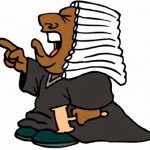 Often, it seems attorneys wished judges would get bad press and get scrutinized by the public, when they make a “bad” decision against their client. Well it looks like Cook County jail is helping them achieve that.

The Chicago Sun-Times has an article by Robert Herguth and Dane Placko about judges getting upset because they have to show their IDs and open their car trunks every time they go in and out of the parking lot at the Leighton Criminal Court Building near Cook County Jail. Apparently, a lot of them are resisting the procedure because the article has a long list of what they’ve done, such as one calling 911 and others swearing at officers.

You’d think since they’re judges, they’d try to be more professional, especially since “judges behaving badly” makes a good story in the media. But they don’t seem to care, which is the problem: they should think about their public reputation and be careful about what they say.

Even though lawyers are probably happy the judges embarrassed themselves, the lawyers can learn from the judges’ mistakes. When you’re in court, you have to be completely professional to win a case and not lose your cool. That’s also important outside of court. Wherever you are, the media is watching and ready to record your actions, which also means the public can easily form a negative opinion about you.

Previously, I mentioned defense attorney James Ecker, who developed a style walking to and from court. He got the media’s attention, and a lot of people’s respect. He won cases and won in the court of public opinion.

So the next time you’re facing a situation that’s difficult, think before speaking. Don’t let others get the last laugh…at you.