With all the complexities with the Russian scandal in the White House, it seems like President Trump should not have delegated his Russian relationships to his son. However, delegating tasks seems to be the trend, not just in politics, but in business as well. 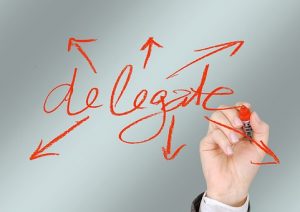 The BBC’s Catherine Snowdon describes how companies have set up ways to take over tasks that people don’t want to be responsible for. One company sends texts or emails for people who don’t want to deliver the bad breakup news themselves. Another company has invented a machine that can write notes for someone when they want to avoid using a pen and paper. And if people don’t want to stand in line for tickets, they can hire others to do that as well.

It seems like people are paying good money to avoid responsibility, allowing companies to take over their relationships. However, there are three reasons why it’s not such a good idea, even if you’re giving them permission to do so:

1 – Relationships are important. Whether they’re romantic or professional, close relationships require real interaction, even if the relationship is being terminated. In business, valued customers require honest communication. Even if an outcome is not favorable in the short-term, the personal touch can have positive long-term benefits. If the breakup is handled tactfully, the door can be left open.

2 – Your voice is your own. There are many Elvis Presley impersonators, and people who haven’t heard the real Elvis might be fooled. However, fans who know him understand that the impersonators are just imposters. So even though a fancy machine can write notes in your handwriting, it’s still not the real deal. Important contacts in your network would know that a note did not come from you, so the communication would not be genuine or foster a closer relationship. Basically, a copy isn’t as valuable as the original.

3 – Failure. No one wants to experience failure, but cutting corners can make it happen faster. Maybe businesses can save money by hiring others to take over mundane tasks. After all, what executive has the time to stand in line all day? Or deliver bad news, and be put in an awkward situation? However, companies have to be careful about what they delegate, and to whom. A well-known example is the Chicago Tribune, which outsourced work for the Blockshopper site to offshore writers who created stories under fake names. When the deception was uncovered, the Tribune was caught, and their reputation for journalism suffered. If they’d checked the company they’d farmed out their writing to (which also included writing generated by computers), they probably could have avoided the problem.

Basically, it’s important to think before you act, especially when handing off responsibilities to someone else. Prioritizing is key. While Donald Trump probably could trust his son in many matters, he should have re-thought what could have been delegated as he was pursuing the White House.

This was originally posted at Westmeath Netsortium of experts: creating programs to help enterprises perform better.